FAIRS PROMOTE SURROGACY IN THE HEART OF EUROPE

On the weekend of November 6 and 7, 2021, in Brussels, the event “Men Having Babies” will be held. Its stated aim is to provide information on the practice of surrogate motherhood although this practice is not officially legalized in Belgium and is prohibited in the vast majority of European countries.

At the Mercure Hotel in BILBAO on 6 November 2021, the Spanish organisation “SON NOESTROS HIJOS” is organising two days of training on the theme of surrogacy for LGBTI families.

ICASM considers it unacceptable that foreign clinics are allowed to promote surrogacy in Europe.

Surrogate motherhood is a practice sanctioned by most European Union member states’ legislation. Since it is impossible for couples in these countries to resort to this practice in their own country, they often turn to foreign clinics in countries where surrogacy is permitted. This gives rise to a phenomenon that has been called “reproductive tourism” for several years. In order to circumvent the progressive legislation of most European Union countries, these couples “manufacture” their child abroad. They use a surrogate mother, who will receive financial compensation, to carry a child that will be given to the so-called sponsor parents at birth.

If this practice is prohibited in most European countries, it is because it is considered to be an affront to human dignity, both for the surrogate mothers, who are used for the benefit of others, and for the children, whose best interests are certainly not to be bought or sold.

ICASM considers it unacceptable that foreign clinics are allowed to promote surrogacy on European soil. It is opposed to such events being held in Europe. Indeed, authorising the holding of such events in countries where surrogacy is not legal, although tolerated as in Belgium, or forbidden as in Spain, makes the host state complicit in the exploitation of women and the sale of children. Furthermore, it encourages couples from countries where the practice is prohibited to circumvent the legislation of their own country.

Homosexuals, singles or heterosexuals, the desire for a child does not justify the instrumentalization of women, nor the sale and purchase of children
Whatever form it takes, for us surrogacy is a practice unworthy of societies that advocate human rights. There is no such thing as “ethical” surrogacy. 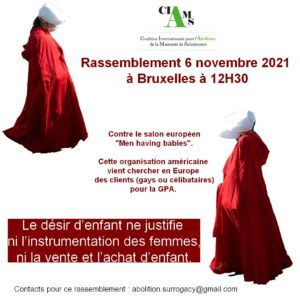 To allow an act of propaganda for surrogacy ( reproductive exploitation)  is to consider the desires of people who cannot reproduce as being above human rights, the dignity of women and newborns. 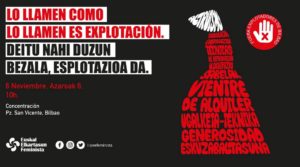