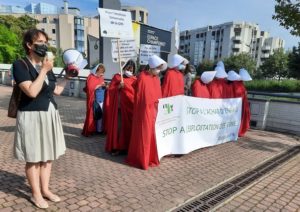 On 4 and 5 September 2021, the DESIR D’ENFANT trade fair was held in Paris: ICASM, supported by its organizations members, was there to oppose this practice, on the theme of the dystopia  by Margaret Atwood : the handmaid’s tale.  On display and in the workshops it was obvious that behind the glamorous image of surrogacy, lie the interests of the market for which everything can be bought and sold.

This gathering organised by ICASM, supported by Osez le Féministes, Libres Mariannes, the Maisons des Femmes de Paris, the Forum Femmes Méditerranée, CQFD Lesbiennes féministes, the CoRP and the Amazones, was marked by a heartbreaking evocation of all the surrogate mothers who have died from surrogcay, who are invisibilised and ignored. ICASM  reaffirmed that parenthood is a choice, not a right, and that no one and nothing can dispose of a child life, and that the trading of women’s reproductive capacity is not worthy of progressive societies.

With the focus on destinations considered advantageous because the remuneration of surrogate mothers is limited by law, with the promotional offers of surrogacy from supernumerary embryos and the guarantees of reimbursement in case of failure, this fair proves once again that surrogacy violates the basic principles on which the equilibrium and viability of our societies rest. 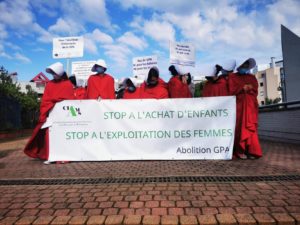 ICASM S is an international organisation that campaigns for the abolition of surrogacy throughout the world. It gathers forty organizations from thirteen countries and three continents, which fight for women’s rights and/or human rights. It is an organization that bases its action on feminist values, such as equality between men and women, self-determination and women’s emancipation. In its statutes, it clearly mentioned its stand for equality of homosexual and heterosexual sexualities. 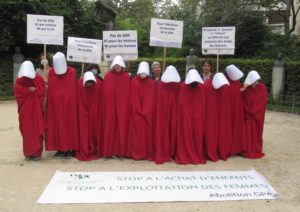 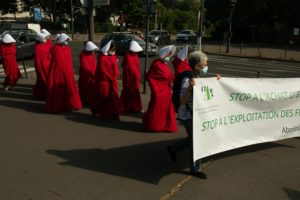 Share the post "The evidence is clear: surrogacy is nothing but the sale of children and reproductive exploitation of women"