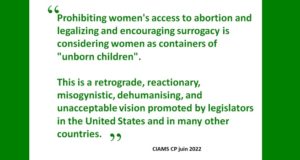 On Friday 24 June, the US Supreme Court overturned Roe v. Wade by 5 votes to 4, ruling that there is no longer a federal constitutional right to abortion.

To implement this decision, each state must pass its own abortion legislation. Abortion rights organisations estimate that between 22 and 26 of the 50 states ban or will ban abortion.

All of these states prohibit or outlaw abortion on the ground of protecting “the unborn child”[1]; sometimes to the detriment of the mother’s health and even life. Nowhere do legislators consider the welfare of pregnant women, nor the risks they incur by carrying an unwanted pregnancy.

But these states which now prohibit abortion are also those which, like almost every American states, accept and legalise surrogacy, for the benefit of a huge reproduction market, in the interest of wealthy clients, reach enough to buy a baby (by contract, they exchange money for the handing over of a child and his or her parentage link, which is equal to the sale of children).

Under US surrogacy contracts, the first payment is made to the surrogate mother when the first heartbeat of the foetus is recorded. The child that a surrogate give birth to already “belongs” to the commissioning parents as soon as the embryo is inseminated.

For US legislators, in the case of surrogacy, the relationship between the child and the woman who gives birth to is taken for granted, so does the pregnancy and delivery The commissioning parents are intitled to every right, including the right to impose an embryo reduction or abortion on the pregnant woman, as well as the type and date of delivery. By contract, she is deprived to her decision-making capacity and autonomy.

Prohibiting women’s access to abortion and legalising and encouraging surrogacy both stem from the same vision of women as containers of “unborn children”. A retrograde, reactionary, misogynistic, dehumanising, and unacceptable vision which is promoted by legislators in the United States and in many other countries.

The International Coalition for the Abolition of Surrogate Motherhood condemns the decision of the US Supreme Court, and the harmful consequences it is already having for American women who need to have an abortion.

We wish to warn public opinion to the intrinsic link between the development of surrogacy and the ban on abortion. The two go hand in hand and are part of the same attack on women’s rights and health.

[1] According to the Convention on the Rights of the Child, Article 1 “a child means every human being below the age of eighteen years unless under the law applicable to the child, majority is attained earlier”. That is, from birth to the age of 18. https://www.ohchr.org/en/instruments-mechanisms/instruments/convention-rights-child