On the website of the Hague Conference (HCCH), it is said that the group of experts will meet again from 15 to 19 November, by videoconference, to finalize a report on parentage for children born through surrogate motherhood.

The expert group was established in 2015 by the HCCH Council on General Affairs and Policy (CAGP). Since then, the experts have met 9 times, and, on the week of November 15, a tenth meeting will take place. In March 2021, the CAGP extended the mandate of the Expert Group for another year to enable it to submit its final report to the CAGP at its 2023 meeting.

In the conclusions of the CAG, adopted in 2019, it is reported that most experts advocated that future work should be devoted to the development of the following two instruments:

– a general private international law instrument on legal parentage; and;

– a separate protocol on legal parentage established as a result of international surrogacy arrangements.

ICASM (International Coalition for the abolition of surrogate motherhood) has been denouncing these meetings for years and is opposed to them because, by adopting such a protocol, the HCCH would clearly open up to surrogacy. Indeed, although the experts keep repeating that it is not a question of encouraging surrogacy, it is certain that wanting to harmonize national laws on filiation for children born from this practice, legitimizes the practice. The effect of the proposal, which has been drawn up in the greatest silence, is to automatically grant parentage to anyone who circumvents the law of his or her own country in order to buy a baby in a country where the reproductive exploitation of women has been legalized, or is tolerated, and where the sale of children has ceased to be a crime and has become a very lucrative business.

Most of the countries, members of the Hague Conference, prohibit the practice of surrogacy, most often in the name of human dignity. Why should they sign and ratify a text that legitimizes such a practice when it is prohibited in those countries?

The paradox is obvious.

The work of this group of experts often goes unnoticed, it does not appera the news and very few people, even within the institutions, are aware of the existence of this project.

For this reason, ICASM wants to denounce these meetings and ask the governments of the countries where this practice is prohibited to oppose this text. Approving this protocol would mean that the Hague Conference with its 85 Member States would bow in front of the private and commercial interests of the human reproduction industry, since, as the institution itself acknowledges in its own documents, “it is now well-known that surrogacy is a global business”.

Surrogacy is a practice that is contrary to human dignity and violates the rights of women and children. The commodification of women’s and children’s bodies is not acceptable in a society that advocates respect for human rights.

ICASM once again opposes the work of this Experts’ group and is launching a campaign on social networks that will last from 15 to 19 November. It will denounce the holding of this meeting and recall that surrogacy is nothing but the reproductive exploitation of women and the sale and purchase of children.

ICASM is an international organization that campaigns for the abolition of surrogacy throughout the world. It gathers forty organizations from thirteen countries and three continents, which fight for the defense of women’s rights and/or human rights. It is an organization that bases its action on feminist values, such as gender equality, self-determination, and women’s empowerment. One of the founding organizations is a lesbian organization and in our statutes we clearly express ourselves for the equality of homosexual and heterosexual sexualities. 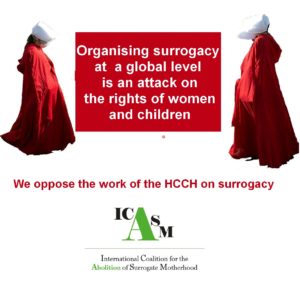