The Hague Conference has 85 State Members, including the European Union

Its aim “The Hague Conference aims to work for the progressive unification of the rules of private international law”.

It does so by means of international conventions and optional protocols. Definition: “The convention: agreement between States, synonymous with a treaty. It has binding legal force for the States that have ratified it … The protocol: an agreement which supplements an international treaty, a convention, and which has the same legal value as the latter”.

When did the Conference come to work on surrogacy?

Chronology of the work of The Hague and feminist reactions

2010 – decision to launch work on the subject of parentage following concerns about “the impact of surrogate motherhood cases on the practical operation of the Hague Convention of 29 May 1993 on Protection of Children and Cooperation in Respect of Intercountry Adoption”.

2015: decision to entrust “a group of experts with the task of further studying the feasibility of establishing a multilateral instrument”.

2015: call on the Hague Conference at the initiative of the CoRP collective, signed by many feminist organisations to oppose the Hague Conference’s decision to start working on the international regulation of surrogacy. https://collectifcorp.files.wordpress.com/2015/01/surrogacy_hcch_feminists_english.pdf

2018: ICAMS International Coalition for the Abolition of Surrogacy took part  in a consultation in The Hague, organised by the NGO ISS International Social Service (observer at the Hague expert group) and defended the need to consider the abolition of the practice, along with the regulatory approach – the only way taken in account  by the Hague Conference.

03-2020: decision to extend the work of the group of experts for 2 years with a mandate to develop 2 tools :

October 2020: the ICAMS International Coalition for the Abolition of Surrogacy communicated to the group of experts the draft International Convention for the Abolition of Surrogacy that it had prepared in order to take into account an abolitionist perspective. In support of this, CIAMS also sent this draft to the delegates of the abolitionist member countries of the Hague Conference.

How far is the expert group today?

What is worrying is that the work is very advanced.

The conclusion of this international convention supplemented by a protocol is a de facto recognition of the legality of cross-border surrogacy and endorses the fact that there are categories of women around the world who are exploitable and specialised in reproduction.

It is a blank cheque given to the market. An obvious green light!

If this work succeeds and is validated by the Conference’s member states, it will be extremely difficult to go backtrack. Of course, the ultimate decision rests with the governments, but among the 86 members of the Conference, who will oppose it?

Another point: it is not logical for an institution specialising in private international law to deal with a subject that falls within the scope of fundamental human rights.

It is also worrying that the Hague Conference, praised in 1993 for its convention “on the protection of children and cooperation in intercountry adoption” which aimed at putting an end to international child trafficking, should come to regulate a practice that organises the sale of children and the instrumentalisation of women.

Some experts suggested that references to “surrogate mother” should be more neutral and suggested considering the possibility of using other terms such as “surrogate” or “surrogate woman”. »

It is a negation of motherhood!

“The Group reaffirmed that any future protocol on parentage established as a result of an international surrogacy convention should not be considered as a means to promote or oppose surrogacy. »

With this sentence, the expert group is obviously disclaiming any responsibility 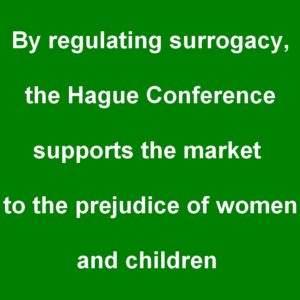