This press release has been first published on https://stopvientresdealquiler.wordpress.com/2019/06/23/for-a-lgtbi-pride-without-oppression-notinourname/ 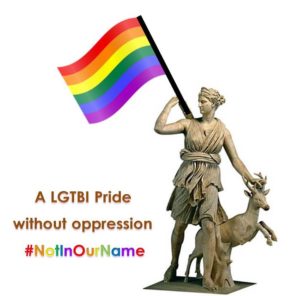 From Stop Vientres de Alquiler,  RECAV  State Network Against the Surrogacy and NO somos vasijas, on the occasion of the International LGBTI Pride Day 2019, we believe it is necessary to launch this communication in favor of a family diversity free of reproductive exploitation and violence against women, because It is urgent to stop equating adoption and fostering, which are acts of love and generosity, to subrogation, which is nothing more than the exploitation of women for reproductive purposes and the sale of newborn babies, on the basis of an exacerbated individualism that does not represent , far from it, the entire LGBTI collective.

We invite you to join the press release, both individually and on behalf of your organizations. (Click here)

For a LGBTI Pride 2019 without opression

1. We ask the Spanish Government, the European Union and the United Nations to continue working firmly so that LGBTI people are respected throughout the world and their human rights are not violated for reasons of sexual orientation and gender identity.

2. LGBTI persons should have the opportunity to be able to satisfy without discrimination their desire to form a family, with both biological and adoptive creatures, without this implying the violation of the fundamental rights of third parties.

3. We support all family models and believe that the visible and non-discriminatory existence of the various family models that make up homoparental families or rainbow families is a cultural and social enrichment.

4. We can not forget that it has been mainly feminist women who have most helped the LGBTI community in their legitimate struggle for the recognition of their right to marriage, reception or adoption, equaling it to the rest of the citizens.

5. Gay couples are being used by the techno-reproductive industry as a commercial claim, showing an elitist, classist practice that violates women’s human rights, as something aspirational for the whole group.

6. The surrogacy agencies are presented as “gay friendly” companies that allow these new families to fulfill their dream of having a son or daughter with their same genes, but accept as more desirable the genetic filiation between parents and children and daughters, that the filiation by adoption, reinforces the patriarchal values ​​on which the traditional heterosexual natural family is based.

7. We live a moment of inflexion in the Spanish LGBTI movement in which the individual interests of a classist minority bid to enter strategically in the agenda of the whole group, through the legitimization of the rent of bellies. However, we must insist that the hire of bellies is based on the claim of hedonistic and selfish individual desires and not in the defense of the collective rights of LGTBI people.

8. We reject the “pink” capitalism that is distorting the LGTBI discourse and positions itself in favor of this practice, exerting great media and political pressure, in favor of a multimillion-dollar industry that is based on the commodification of women.

9. Accepting the commodification and reification of women and babies, jeopardizes any attempt at real emancipation of gays, lesbians, bisexuals and trans and would be a step forward in a neoliberal model of society that directly attacks the LGTBI collective.

10. We do not want to be participants or accomplices in a market for the trafficking and exploitation of women and babies. We do not want to go from oppressed to oppressors. As a collective, we are not willing to assume rules imposed by a patriarchal system that has always discriminated against us. The family is not formed exclusively by people linked by blood ties, but by people who love, care for and protect themselves.

About us
Stop Vientres de Alquiler is a feminist outreach project that aims to promote knowledge and create social awareness about surrogate motherhood, which is nothing more than reproductive exploitation of women and baby market. For this we collect, analyze and share available information about this aberrant practice and its consequences for women, girls and children. Likewise, we elaborate informative and educational materials, we give talks, we launch campaigns in social networks and we give advice to associations, mass media and society in general, telling the truth about the subrogation.

As feminists we can not close our eyes to the deep patriarchal features of this industry, where motherhood is something disposable while fatherhood becomes increasingly sacred.

Stop Vientres de Alquiler, was born in April of 2017 and is articulated in a community of more than 18,000 people through the following social media of communication: